Every purchase order (PO) receives a bag of Almond Roca. Send us a PO or an additional PO to add your name to our list the next week:

Die Casting Parts and Almond Roca Special: From now until the end of February 2020, we will be sending a half pound bag of yummy homemade Almond Roca to our customer’s company buyers for any new purchase orders (POs) for production die casting parts and for die casting tooling purchase orders. Purchase Orders received from now to the end of February qualify for the free candy. If you have never received our homemade candy, now is the time to get some, by placing purchase orders you need to place anyway. 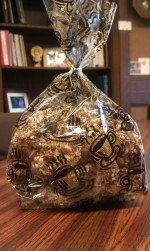 Spending Less on Aircraft Parts with New Aerospace Die Castings. In the aircraft industry, the cast aluminum metal has established a wide application in the production of both major and minor component parts. It has long been utilized in this field since the aviation entered the commercial scene. Even before the commercial aircrafts have given the chance to take off, the military has already used this metal along with its alloys for the manufacture of the parts of fighter planes. The good thing about the new aerospace die castings is that they are now geared to endure harsh weather conditions and increased damages.

Because of the recent rise in the cost of manufacturing materials, the owners of aircraft companies are now considering the potential of the aluminum casting technology. Cast aluminum is much more affordable than any other metals that are used in planes. Combined with other metals, it produces a piece that is extremely durable yet considerably flexible.

The use of aluminum die cast parts tends to allow the builders of aircrafts to cut on manufacturing expenses without even sacrificing the over-all quality of their trade. There is actually a certain standard that has been established for the use of aluminum in aircrafts so the parts are certified safe in the aerospace. Another good thing about an aluminum die cast part is that its weight appears to be favorable for the aircraft operations.

To get a price for aluminum die casting parts or die casting tooling, call toll free 800-524-8083 and ask for sales. Or email us at sales@kineticdc.com for a fast response on a price quote.

Plastic Injection molding and aluminum die casting are similar in a lot of ways:

Contact Kinetic Die Casting Company to get a price for aluminum die casting parts or die casting tooling, call toll free 800-524-8083 and ask for sales. Or email us at sales@kineticdc.com for a fast response on a price quote.

Three of the Most Popular Die Casting Alloys 2019

Three of the Most Popular Die Casting Alloys. Aluminum is the most accepted out of all die casting alloys. Besides its lightweight features and its sturdy ability, aluminum is also found to be very inexpensive measured up to other die casting alloys. When choosing the ideal material to utilize in die casting, it is vital to have concise information as to how each alloy is different from one another. Although aluminum may have a lot of benefits and advantages compared to other materials, some die casting companies also prefer not to use aluminum owing to its high shrinkage capability and also its receptivity to high temperature.

Copper is one of the various other die casting alloys like zinc die casting available in the scientific procedure. One of the advantages of employ copper is its inflexibility and its ability to decrease ductility. Copper is also identified not be receptacle to corrosion, generating an outstanding substitute to aluminum. On the other hand, if you are looking for a type of alloy that is able to work on narrower walls compared to the effectiveness of aluminum, you can also use Zinc as an alternative. Zinc has the capability to close tolerances because of its fluidic nature that is highly influenced by high temperatures. When die casters decided Zinc as its die casting alloy, the casting is processed at a lower temperature than usual so as not to completely melt the die. As soon as the die is shaped, it is much easier for die casters to permit the result to solidify due to the material’s sensitivity towards temperature.

The Popularity Of Die Cast Toy Cars. Matchbox is a die casting company that originated in England in the 1950’s. Throughout this time, employing die casting to generate toys was starting to become popular, and not too long afterwards, the …
Continue reading »